Water Hammer: What is it?–How does it Happen? 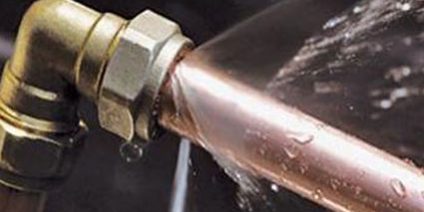 If your taps make strange sounds when turned on, it’s probably not a poltergeist haunting. The most likely cause is an issue called hydraulic shock, which is more commonly known as water hammer.

The condition typically results in noisy pipes throughout the property. However, in more extreme cases pipes can burst resulting in flooding. Violent shaking may also lead to the pipes disconnecting if the issue is not addressed.

Corroded or weakened pipes are particularly vulnerable to damage when your plumbing has water hammer issues. The pressure waves will eventually cause the pipe to burst. You will then need to address the water hammer issue, replace the damaged pipes, and clean up the mess caused by the flood. 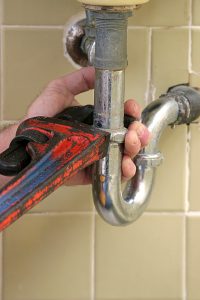 What is Water Hammer?

Plumbing is based on a predicted flow of water. When the normal water flow is disrupted, due to stopping or the direction of flow changing, it creates pressure. As with any kind of pressure, the force needs somewhere to go. Until the pressure can stabilise it will send mini shock waves through the pipes.

It is worth noting, however, that water hammer won’t always cause pipes to rattle or make a sound. Contrary to what you may imagine, that is not a good thing. The pressure surge in the pipes can still cause damage. At the very least, noisy pipes will give you fair warning that there is a problem.

There are a number of possible causes of water hammer. Most causes stem from water pressure issues in the flow control systems. Certain valves, such as those found in washers and water sprinkling systems, can cause the water flow to cut off rapidly. Similarly, flick type cans have the same effect on water flow.

Either water pressure is too high as it runs into your property, or the flow of water is impeded through the pipes because of damage or debris. Other causes include faulty pumps, ill-designed plumbing systems, or unbalanced pressure coming from the main water supply.

The source of water hammer, given the number of possible causes, is particularly difficult to detect. There are however a couple of main causes of water hammer, which includes large water pressure buildup, wiggly pipes or water in the air chambers. Either way and whatever the cause, water hammer should be addressed sooner rather than later as this can lead to wearing on the pipes and eventually leaks.

How to Fix Water Hammer

Unless you have a high level of experience in plumbing you will need to hire a professional. If it is a one-off issue, you can try correcting the problem by running taps in the upper level of the property. Doing so will help restore balance to the water flow, as long as there isn’t a serious issue at play.

The plumber may need to install special valves for your washing machine, dishwasher, or sprinkler system to resolve the problem. If the issue is stemming from the mains, anti-hammer devices are recommended to correct issues with pressure and water flow.

Older homes are more prone to water hammer due to outdated or badly designed systems. Adding newer systems to old plumbing can also cause issues, as the previous system was designed to operate under specific pressures.

There are two ways to effectively avoid water hammer issues when building or buying a new home. In a new home design, it is important to incorporate anti-hammer devices and ensure your plumbing is correctly designed. When buying a home a thorough building inspection will identify any issues with plumbing which will need addressing.

Most water hammer issues are resolvable, so do not hesitate to seek help from a plumber. The cost of repairs at early detection will far outweigh the cost of repairing damage to pipes and, floors, walls or furniture. You won’t regret spending the money to correct the issue and you definitely won’t miss those noisy pipes.