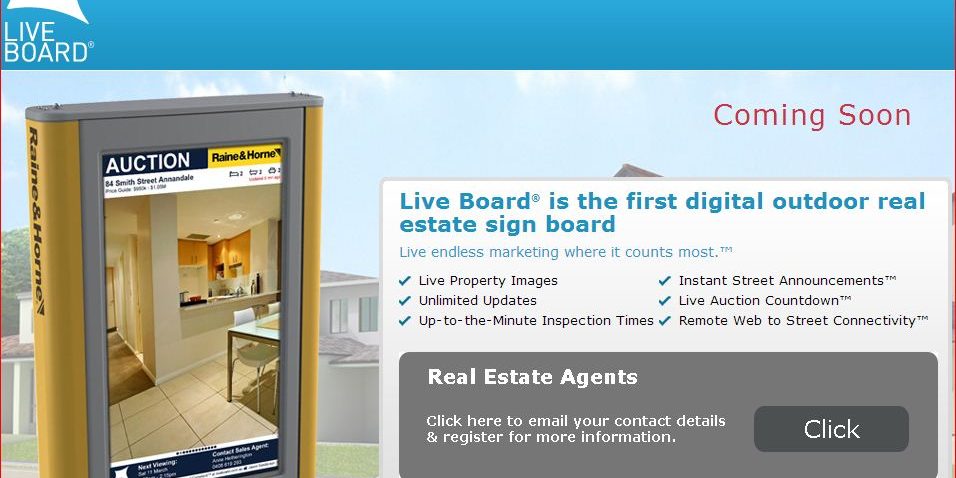 Electronic real estate boards are the way of the future, according to one advertising expert.

As agents thrive to stand out amongst the sea of ‘For Sale’ boards, Pierce Cody, CEO at Live Board claims the world’s first real estate digital board could be the answer. According to Mr Cody, the Live Boards are designed to redefine how real estate agents engage with prospective buyers.

“The boards are the way of the future,” he said“The static board is like the newspaper – it will slowly become redundant. It is the same as going from one of the metro dailies to iPad. It will be unstoppable.

“I predict everyone will be using these boards in the near future.”

Unlike current static ‘For Sale’ signs, the digital boards bring a property to life, allowing prospective buyers to see an infinite range of details and images of their potential new home without even entering the building. Content for the boards is managed by the real estate agent from a control centre at the agency office, providing greater marketing flexibility.

“We’ve got many of the top guys in the industry already pledging their support. They see it as a natural migration from static boards to digital, as with other industries that have evolved to embrace new technology.”

According to Mr Cody the Live Board signs are fitted with advanced security systems to stop the risk of vandalism.

“We know vandalism is a risk, so we’ve fitted the boards with a motion detecting camera that will record when someone comes to close and an alarm will sound if it is moved while switched on, it also has a GPS to record its location,” he said.

The first digital Live Board will be introduced into the market in early November.