So the Shower Leaks? – Waterproofing 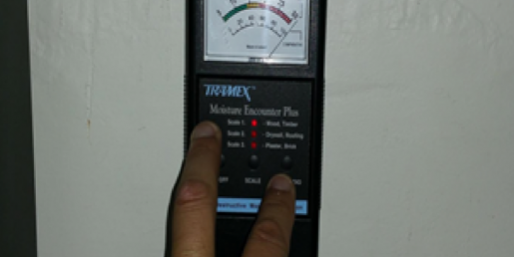 One of the most common defects discovered during pre-purchase building inspection is the failure of waterproofing in wet areas, most commonly within a shower recess. Failure of the waterproofing membrane below wall and floor tiles is often identified by the breakdown of the wall surfaces (paint, plaster or wall paper). This is usually on the outer wall of a shower recess within a standard brick and tile home. Within pre purchase building inspections, where an outer wall (to a shower recess) has been recently painted, this is also a solid indication that a problem may exist.

A visual inspection will often be the first observation of a waterproofing membrane failure which can be quickly confirmed through the use of a moisture meter. Multiple readings across a wall surface can indicate the overall percentage and location of moisture in a wall and  the likelihood of ingress of moisture into the wall. If not repaired, high levels of moisture can cause significant damage to a property over time. In some cases, the increased moisture levels can attract termites.

To restore an effective barrier against water intrusion within a shower, the homeowner/homebuyer has two options. They can remove all of the tiles in order to repair the waterproofing membrane, then replace the tiles. This can be very expensive, especially if the original tiles cannot be matched, requiring all of the bathroom tiles to be replaced.

Alternately, the homeowner can engage professionals who re-grout and reseal the existing tiles to the impacted wet area. This option is generally significantly cheaper; often less than $1,000. Quality suppliers will often also provide a 15-year guarantee on both their product and workmanship.

Is a waterproofing issue a Structural Defect within the Definition of REIWA Building Inspection Clause?

As a general rule, high levels of moisture in a wall adjacent to a shower is a defect within a property, but not a structural defect. Hence, where the standard REIWA Building Inspection Clause has been utilised within an Offer and Acceptance Contract in WA, responsibility to resolve this specific issue will generally fall to the buyer. Every circumstance can be unique, so buyers and sellers should speak with their Agent, Settlement Agent and/or legal adviser.

Does it only impact older homes?

While the breakdown of the waterproofing membrane is common in older homes, occasionally it is also found in brand new home construction.  When the issue is identified within a new home, it almost always relates to a poorly applied or incomplete application of the waterproofing membrane. Given the potentially significant impact on a new home, at Houspect, we always recommend a staged inspection throughout the construction process and, in particular, a stage we call “Lock Up and Waterproofing”. Not only do we inspect the usual items at the lock up stage but we also want to inspect the completed waterproofed surfaces prior to the tiles being laid.

Is a waterproofing issue a building defect within a new home covered by Builders Indemnity period?

Yes. A failed waterproofing membrane will generally be covered under a builders 6 year indemnity period obligation.

Need more information – Waterproofing must be done in accordance with Australian Standard AS3740-2010.

Effective waterproofing within both new and older homes is a key component of all buildings and needs to be checked. Houspect WA inspects keep a close eye on visual signs of waterproofing failure and where appropriate will utilise moisture meters to confirm positions.

Pest Inspections in WA – The Alarming Facts that You Need to Know!
September 21, 2018