Cook Tops – Induction What Is It? 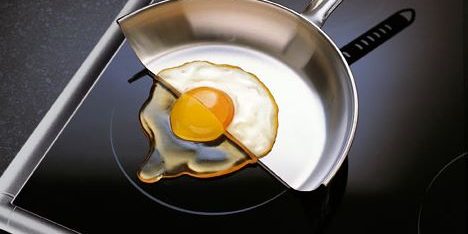 When it comes to choosing cook tops, homeowners are not always fully informed on the pros and cons of each type. If you are a fan of cookery shows, you will have no doubt heard countless chefs tout the superiority of gas cook tops.

Natural gas, which is used for cooking, is a form of fossil fuel. In a world where manufacturers are under increasing pressure to come up with greener options, gas cook tops score at the bottom of the eco-friendly scale. Not only does gas cooking contribute to the rapid depletion of fossil fuels, it also releases harmful by-products into the atmosphere through exhaust.

Conversely, induction cook tops are, by design, built to reduce your carbon footprint. From a cost perspective, induction cooking transfers roughly 90% of the energy used to the cooking vessel, whereas gas typically wastes 50% of the same energy. Similarly, coil electric cook tops waste around 40% to 45% of energy distributed to the cook top.

How Does Induction Work?

When using an induction cook top, an alternating current is passed through a ferromagnetic coil, which is then transferred to the cooking vessel. Ferromagnetic refers to materials which have high magnetic properties.

In order for an induction cook top to work, you must use compatible pots and pans, such as cast iron or stainless steel. However, you can also purchase cookware which has a base specifically designed for induction cooking. All the heat in induction cooking is transferred to the cooking vessel. That means the cook top remains cool during cooking.

Other Benefits of Induction Cook Tops

The distribution of the heat through ferromagnetism has the added benefit of heating food and liquids quickly. Additionally, induction tends to result in a lower likelihood of food sticking to pots and pans. This welcome benefit is the result of heat not being concentrated in certain areas of the vessel, causing food to burn or stick.

The ability to quickly reduce or increase cooking temperatures is also a considerable benefit, which is even changing minds among many professionals. From a safety perspective, there are also a number of benefits to consider. There is no toxic exhaust, which is a major safety feature of induction cook tops.

However, the most pertinent safety feature of induction cook tops is perhaps the fact that the hob does not retain heat. That means that no matter how long you have been using the cook top, there is no risk that you will burn yourself from touching the cook top.

The cons of induction cook tops are few and, in reality, largely subjective. As only ferromagnetic pots and pans are suitable for use in induction cooking, you may need to replace your cookware. Considering the cost of stainless steel or cast iron cookware, however, it’s a small price to pay.

Induction cook tops are considered a top end product. However, with increasing demand, manufacturers are eager to offer induction cook tops at affordable prices. For homes with a separate cook top and oven, the cost is further negated as you will only need to replace a single kitchen feature.

Final thought: As the saying goes; the best proof is always in the pudding.  So when you are viewing perspective new homes, why not ask for a demonstration of the owner’s induction cook top? You will get to see firsthand exactly how an induction cook top works, and have more to consider when choosing the right home for you.