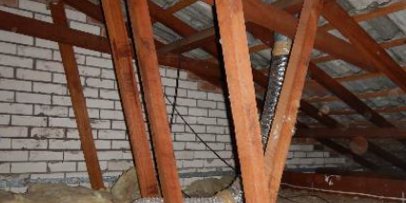 What are they and do they impact me?

So let’s assume you have two or more adjacent strata units and they share a common wall (party wall) and potentially a common roof/roof space. The party wall is essentially the dividing partition between the two adjoining buildings that is shared by the occupants of each residence or business.

Essentially the party wall is the barrier between you and the neighbouring property. Key attributes that are expected to be seen in a party wall are privacy, security and fire protection.

If you have two or more adjoining properties which share a common roof, one of the key attributes of the party wall is that it should offer the unit occupants with privacy and security. That’s right, the occupants of one unit should not be able to traverse into the roof space of an adjoining unit. Seems obvious but this is not always the case.

The picture above is of a multi storey strata complex with a number of upper floor strata Lots. What is unusual is there is no separation of the upper floor roof space via party walls. In essence, people gaining access to the roof space can traverse the entire roof space of the strata complex, obviously compromising the privacy and security of individual occupants. There are questions as to how this property was ever allowed to be strata titled, but none the less it was and the issue is real.

Essentially party walls also serve as fire walls. The party/fire wall should be an effective barrier to the transfer of fire from one unit to another. To achieve this requirement the Australian Building Code requires essentially a fire rated wall to be constructed from the foundations of the building through to the underside of the roof cover. Generally this is a solid (normally brick) wall which divides the roof spaces between units. The wall needs to have a fire rating of at least 60 minutes such that if a fire starts in one unit there should be at least one hour protection before the fire could breach the wall.

The above picture demonstrates a compliant fire wall between strata units. What is important to note is that the original party/fire wall would not have been compliant as there were gaps at the top of the wall which have subsequently been filled with different coloured bricks to make the wall compliant.

The following pictures demonstrate non complaint party fire walls given the gaps which are clearly visible in the walls. These walls are non-compliant.

Where gaps are identified in the wall, the gaps should be filled by inserting the missing bricks or filling the gaps with a fire rated material which provides a minimum of 1 hour protection.

The current requirements in regard to Party/Fire walls have essentially existed in WA properties since 1988. However, in older WA properties some councils permitted roof timbers (i.e. underpurlins, strutting beams) to pass through the walls. These timbers were generally hard wood and the walls were constructed tightly around the timber. While it would be difficult for fire to burn through the timber within one hour and enter the adjoining unit, timbers are no longer permitted to pass through these fire walls.

The answer to this key question will be found in the strata plan for the complex. The strata plan defines the Lot boundaries and the common property.  The ownership of the party wall can differ between strata properties and should be individually checked.

It is possible that during a pre purchase building inspection, issues with Party/Fire Walls may be identified.

Where there are issues with the walls, they may need to be remediated. In some cases significant issues with party/fire walls might be classified as a major non-structural defect and/or a safety issue with a degree of urgency to remediate the issue.

Where a property is being purchased in accordance with the WA REIWA pre purchase building clause which is based on AS 4349.1 major structural defect will generally relate to the sub floor frame or concrete slab, load bearing walls and roof frames. The balance of the building elements are unlikely to be non-structural elements and this includes most party wall issues. Where issues with party/fire walls are identified in a strata home during a pre purchase building inspection:

For Sellers      If issue with a party/fire wall is identified in a property being sold it is unlikely to be a major structural defect requiring remediation by the seller, if the REIWA pre purchase building inspection clause has been utilised as the majority of issues with fire walls are not a structural issue.

For Buyers      If an issue with a party/fire wall is identified in a property being purchased, it is unlikely to be a major structural defect requiring remediation by the seller, if the REIWA pre purchase building inspection clause has been utilised. The buyer should consider remediating the issue post settlement as the issue can impact privacy, security and fire prevention and may be classed as a major non-structural defect or a serious safety hazard but either of these classifications may be insufficient to trigger the REIWA pre purchase building inspection clause.