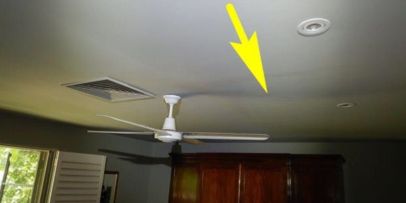 What are they and do they impact property owners and buyers?

The majority of homes in WA will have a plasterglass or gyprock internal ceiling unless there is another floor above, when the ceiling is likely to be the underside of the concrete slab. The ceilings need to be maintained as over time they can pull away from the timbers that support them (ceiling joists). In extreme examples, the ceilings can progress from simply sagging to collapsing.

2       How are ceilings attached to the ceiling joists

Regular readers to our blogs will know that we wrote about issues associated with the fixing of ceilings that emerged during 2005 – 2008 where insufficient glues and fixings were being utilised resulting in an unusually large number of WA ceilings collapsing. Refer our previous article here.

There can be a number of reasons why ceilings sag including but not limited to:

Whatever the reason, sagging ceilings will generally not fix themselves. Often the position will deteriorate until the ceiling collapses if they are not repaired.

If a ceiling collapses in say a 40 year old home it will generally bring down the ceiling, the insulation, 40 years of dust and dirt, bugs and potentially the odd deceased rodent. In short, it will potentially be a substantial mess. You want to avoid this!

In some situations, ceiling sheets or the entire ceiling within a room may need to be replaced.

The industry is quite competitive with a large number of companies offering to undertake repairs. Getting at least three quotes is always a good way of ensuring cost competitive repairs.

Where a ceiling collapses as a result of an insurable event (storms, impacts, fire etc.) then most insurance companies will pay the claim.

No. Sagging ceilings can be found in both new and old homes. Where a home is less than 6 years old in WA, generally the builders defect warranty period will cover the cost of repairs.

Where a property is being purchased in accordance with the WA REIWA pre purchase building clause which is based on AS 4349.1, major structural defects will generally relate to the sub floor frame or concrete slab, load bearing walls and roof frames. The balance of the building elements are unlikely to be non-structural elements and this includes ceilings. Where issues with ceilings are identified in a home during a pre purchase building inspection:

For Sellers      If an issue with a sagging ceiling is identified in a property being sold it is unlikely to be a major structural defect requiring remediation by the seller, if the REIWA pre purchase building inspection clause has been utilised as the majority of issues with ceilings are not structural issues.

For Buyers      If an issue with a ceiling is identified in a property being purchased, it is unlikely to be a major structural defect requiring remediation by the seller, if the REIWA pre purchase building inspection clause has been utilised. The buyer should consider remediating the issue post settlement as it cannot be stated with certainty how long the ceiling will remain in situ. Sagging ceilings may be classed as a major non-structural defect or a serious safety hazard but either of these classifications may be insufficient to trigger the REIWA pre purchase building inspection clause.