The WA Building Commission (“Commission”) released in May 2017, a number of documents relating to spontaneous ceiling collapses in WA homes, particularly relating to homes constructed between 2000 and 2008. Approximately 60 per cent of ceiling failures reported to the Commission occurred around 9 to 10 years after the home reached practical completion. Homes constructed during the years 2005–2007 appeared to be most affected.

Whilst a complex issue, the primary reason relates to how the ceiling was fixed to the ceiling frame and in particular the insufficient application of adhesive and fixings (screws). Revised trade practices where more widely adopted post 2008 where after the number of new incidences reduced. 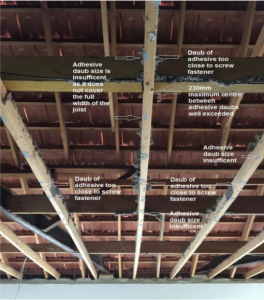 When a ceiling collapses it can create significant issues for the property owner and or property occupant, none the least being the risk of injury. Where it can be demonstrated that the ceiling was not fixed appropriately, the issue may not be covered by residential building insurance policies.

Where a property is being purchased and the REIWA building inspection clause has been utilised, it is important to note that ceilings are excluded from the definition of structural defects under REIWA pre purchase building inspection clause in many “offer to purchase contracts”. Accordingly, any issues found in relation to sagging or ceiling collapses will not be covered by the terms of the REIWA clause. 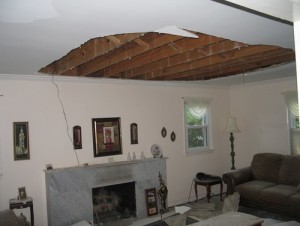 Waiting for the ceiling to collapse can be a disaster. A collapsed ceiling can do significant damage to a home and can cause significant injury. In addition your insurance company may not cover it.

Be Proactive – Look for Signs of Failure and Act Early

It is important that you look for early warning signs that a ceiling may be losing its adherence/fixings to the ceiling frame. If you have concerns about the stability of your plasterboard ceiling, there are checks you can do:

·         Measure the height of your ceiling where it meets the wall and then measure the ceiling height in the middle of the room. A variation in heights of 12mm or more could indicate the plasterboard sheeting has detached from the ceiling joists.

·         Place a straightedge or spirit level over an area of ceiling sheeting and see if there is unevenness anywhere in your ceiling.

·         Check to see if there is a gap between the ceiling sheeting and the joists. This can only be done by accessing the ceiling space. Accessing your ceiling space presents numerous hazards and it is strongly recommended that you engage a suitably qualified person to carry out this activity. Should you choose to enter your ceiling space make sure all power is isolated before doing so.

Patios – The Good, the Bad, the Ugly – Issues to Consider When Buying a Residential Property in WA
May 7, 2019
Latest News
Archives
Go to Top