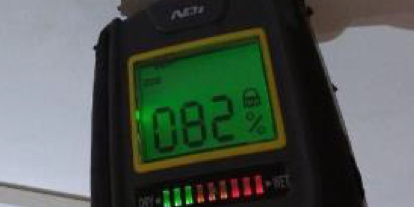 Moisture can enter a residential property through a myriad of different sources; the question in relation to pre purchase building inspections is will it ever amount to a major structural defect? The answer is likely to be no.

Keeping the habitable areas of a residential building dry and free from moisture is a key component of the Australian Building Code. Notwithstanding, water and hence moisture can find its way into the building from a myriad of different sources. These can include:

In short, all of the above can result in moisture entering or being retained within a building.

Most pre purchase building inspection reports on residential properties in WA are undertaken in accordance with AS 4349.1 which defines a range of criteria for major defects. Appendix A refers specifically to structural defects, and most importantly defines what needs to be excluded when considering structural defects. In particular the Standard Notes:

Serviceability damp defects such as condensation, rising damp, lateral damp, falling damp should only be assessed and reported on where structural damage has occurred, is occurring, or  may  occur  (e.g.,  fungal  rot)  significant  spalling  of  masonry  or  concrete  structural elements, significant fretting of mortar, rusting of primary structural elements. Stormwater drainage and surface water defects commonly cause or exacerbate foundation instability and these issues should be assessed and reported on where relevant.

4. So what does all of this mean to the Pre Purchase Building Inspection Reports

It is quite possible that during a pre purchase building inspection, moisture ingress into a residential building will be identified. The source of the water can be quite diverse as described.

Ideally, moisture should be kept out of habitable areas. When it is identified it should be remediated. In some cases excess moisture might be classified as a major non-structural defect indicating a degree of urgency to remediate the issue.

Where a property is being purchased in accordance with the WA REIWA pre purchase building clause which is based on AS 4349.1 major structural defect will generally relate to the sub floor frame or concrete slab, load bearing walls and roof frames. The balance of the building elements are unlikely to be structural elements. Even if the structural elements contain elevated moisture levels it is unlikely that the elevated moisture will be considered a structural defect.

For Sellers If elevated moisture levels are identified in structural elements in a property being sold, it is  unlikely to be a major structural defect requiring remediation by the seller, if the REIWA pre purchase building inspection clause has been utilised.

For Buyers If elevated moisture levels are identified in structural elements in a property being purchased, it is  unlikely to be a major structural defect requiring remediation by the seller, if the REIWA pre purchase building inspection clause has been utilised. The buyer should consider remediating the issue post settlement as the issued can develop into a more significant problem if not addressed.

Patios – The Good, the Bad, the Ugly – Issues to Consider When Buying a Residential Property in WA
May 7, 2019