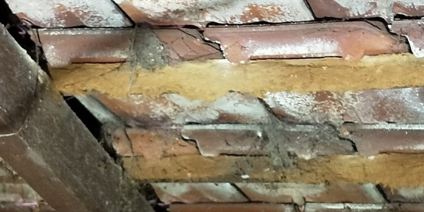 Chemical Delignification of tile battens in WA is not uncommon and at some point, it may require some or the entire cover of tile battens in a roof to be replaced. The question in relation to pre purchase building inspections is will it ever amount to a major structural defect? The answer is likely to be no.

1       What is chemical delignification of tile battens?

Many people have not heard of the term “chemical delignification.” At one time, it used to be commonly referred to as defibrosis, and was also commonly known as “hairy timber.” Both of those terms described the appearance left behind by this chemical process.

To understand this process, it is helpful to understand the nature of lignin, since it is this substance that chemical delignification assaults. Lignin is classified as an organic polymer that is found in the tissues of plants and certain varieties of algae. These polymers are essential for the formation of timber cellular walls, since it fills the spaces within a plant’s cell walls, providing needed rigidity and strength. Some tree species contain more lignin than others, which is one of the reasons why different types of trees offer varying levels of rigidity.

For these and other reasons, lignin is sometimes referred to as the bond that cements wood fibres together. Its role is thus essential for any timber’s structural integrity. The problem is that, like every other timber component, it is anything but indestructible. It can be destroyed by fungi, insects and the elements.

You may have personally seen wood that has experienced delignification. The effects are noticeable even to the naked eye, and include the appearance of hairiness on the exterior of the wood. This is the result of lignin being destroyed or damaged, which in turn causes the timber fibres to separate from one another. That creates a frayed appearance that resembles hair on the timber surface. Timber that suffers from this deterioration loses its integrity over time.

There are certain locations where this process is more likely to occur: around areas where salt water is common, and locations near industrial areas or heavy traffic. These areas offer everything that this chemical process needs to attack timber. Seaside regions are susceptible to delignification due to the way in which air carries salt to the timber. Those winds can carry this salt five or more kilometres into the interior of an area, where it settles down onto building tops, and eventually makes contact with tiles and roof battens. That salt can initiate the delignification process.

While salt in the air might be a significant contributor, chemicals and other pollutants in the surrounding air also get carried by the wind only to eventually settle on rooftops. These chemicals can create the same type of delignification effect, causing damage to the timber.

Tile battens in roof frames run perpendicular to rafters. The sole purpose of the tile battens is an anchor point for clay, cement and slate roof tiles.

While tile battens are critical in holding tiles firm in place, especially during storms, the battens are not a structural element of the roof frame or the building.

Most pre purchase building inspection reports on residential properties in WA are undertaken in accordance with AS 4349.1 which defines a range of criteria for a major defect. Appendix A refers specifically to structural defects, and most importantly defines what needs to be excluded when considering structural defects. In particular the Standard notes:

(a) Any non-structural element, e.g., roof plumbing and roof covering,

It is possible that during a pre purchase building inspection, chemical delignification of tile battens may be identified.

Where a property is being purchased in accordance with the WA REIWA pre purchase building clause which is based on AS 4349.1 major structural defect will generally relate to the sub floor frame or concrete slab, load bearing walls and roof frames. The balance of the building elements are unlikely to be non-structural elements and this includes tile battens. Where chemical delignification is identified in a residential home during a pre purchase building inspection:

For Sellers      If chemical delignification in tile battens is identified in a property being sold it is unlikely to be a major structural defect requiring remediation by the seller, if the REIWA pre purchase building inspection clause has been utilised as the tile battens are not a structural element.

For Buyers      If chemical delignification is identified in tile battens in a property being purchased, it is unlikely to be a major structural defect requiring remediation by the seller, if the REIWA pre purchase building inspection clause has been utilised. The buyer should considere remediating the issue post settlement as the issued can develop into a more significant problem if not addressed. Significant chemical delignification in tile battens may be classed as a major non-structural defect or a serious safety hazard but either of these classifications may be insufficient to trigger the pre purchase building inspection clause.