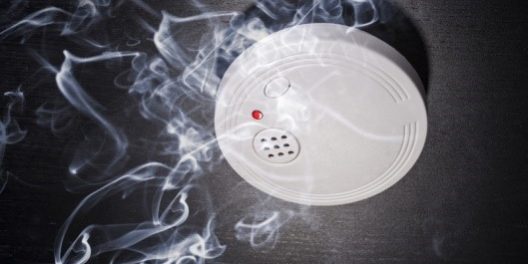 Did you know that the transitional Smoke Alarm rules for post 1 May 2015 approved WA residential buildings end on 1 May 2017?

Let’s Recap the Requirements (when Houses are Sold, Leased or Rented)

Residential properties that are subject to sale, transfer of ownership, rent or hire are required, under the Building Regulations 2012, to have compliant mains powered smoke alarms installed:

What is a Compliant Smoke Alarm?

In accordance with the Building Code of Australia (BCA) applicable at the time of installation of the alarms:

Houses with Building Permit Pre 1 May 2015

The smoke alarms must:

Requirements for transferring ownership, renting or hiring a dwelling Under the Building Regulations 2012, dwellings approved or constructed before 1 May 2015 still need to have compliant smoke alarms prior to transfer of ownership, rent or hire, however the smoke alarms are not required to be interconnected.

In the event that a Pre 1 May, 2015 building approved home requires the smoke alarms to be replaced with AS 3786:2014 compliant alarms, the alarms do not need to be interconnected.

All residential properties where the application for a building permit is lodged on or after 1 May 2015, should be fitted with smoke alarms that comply with AS 3786:2014. However, a two year transitional period was provided which allowed the use of both the 1993 and 2014 versions for a deemed-to-satisfy solution. This transitional period ends on 30 April 2017.

This means that all new homes, where the application for a building permit is lodged on or after 1 May 2017, should be fitted with smoke alarms that comply with AS 3786:2014. Hence from 1 May 2017, smoke alarms must:

Interconnection of smoke alarms in residential buildings for which a building permit application was submitted from 1 May 2015, should be interconnected where more than one alarm is required to be installed.

The requirement for smoke alarms to comply with AS 3786:2014 also applies to any installation of smoke alarms from 1 May 2017 in dwellings subject to transfer of ownership, lease or hire.

This includes replacement smoke alarms in leased or hired dwellings where the smoke alarms are no longer in working order, or are more than 10 years old. This does not however trigger a requirement to replace existing compliant smoke alarms.

How to Identify Which Smoke Alarm is Suitable

How to identify a smoke alarm that complies with the new standard, owners and electrical contractors should be looking for an “AS 3786:2014” marking on the smoke alarm itself. A smoke alarm manufactured under the 1993 version of the standard (i.e. AS 3786:1993) will no longer be a BCA deemed-to-satisfy product from 1 May 2017.

When can You use Battery Powered (Non Mains Powered) Smoke Alarms?

Regulation 60(2) (a) of the Regulations requires the dwelling to meet the deemed-to-satisfy provisions about smoke alarms of the Building Code of Australia (BCA). The BCA requires mains powered smoke alarms to be installed in dwellings where mains power is supplied. This means that where a dwelling is subject to sale, transfer of ownership, lease or hire, and mains power is NOT supplied to the building, a battery powered smoke alarm, which complies with all other deemed-to-satisfy provisions about smoke alarms of the BCA, can be used without the need for local government approval.

However, if mains power is later supplied to the dwelling, compliant mains powered smoke alarms must be fitted prior to sale, transfer of ownership, lease or hire of the dwelling.

The installation of battery powered smoke alarms, that are additional to those required under the Regulations, does not require local government approval.

Regulation 60(2)(d)(ii) of the WA Regulations permits the installation of battery powered smoke alarms where there are no hidden spaces in which to run the necessary electrical wiring for the required mains powered smoke alarms and there are no appropriate alternative locations. The responsibility for determining this rests with the building owner.

When Local Government Approval is Needed

Structural and other problems

This does not include circumstances where there are no hidden spaces in which to run the necessary electrical wiring and there is no appropriate alternative location.

It should be noted that where a battery powered smoke alarm is permitted under regulations, or is approved by local government under Regulation 61(1), the smoke alarm must have a 10 year life battery that cannot be removed and comply with the other relevant smoke alarm provisions in Part 8 of the Regulations. 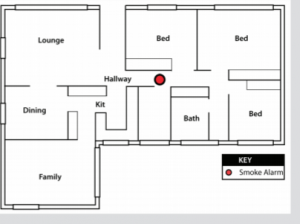 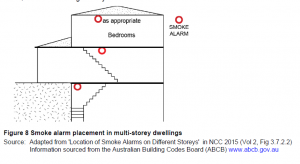 Licenced Electricians should be able to provide you with definitive requirements for individual properties.

A Quick Summary of Requirements 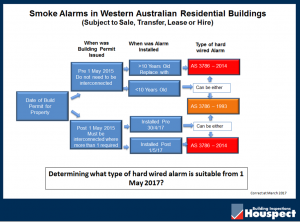